The magic of sport . . . The ecstasy of Istanbul through from a fans perspective.

I love sport. I love absolutely everything about it. The epic highs, the crushing lows. The minutes of sheer sporting drama that define people, make people, on occasions break people.

Who can forget David Beckham’s infamous back heel lunge against Argentina at the World Cup. ‘Goldenballs’ wasn’t so golden after all. In fact he was hated by the British public for a moment of a sporting immaturity.

Then there’s the less salubrious surroundings of Griffin Park. The home of Brenford Football Club, and the setting for a minute of spine tingling drama in their home match against Doncaster. A missed penalty, a quick breakaway goal. Heartache for the hosts. Sheer euphoria for their conquerors. The ‘magic’ I was referring to.

For Brentford, that Saturday afternoon must have felt like a slow, painful unfolding nightmare. They had the chance the win automatic promotion from 12 yards. Instead they had to watch on in disbelief as they were piped to the post. Grown men reduced to tears. Hardened characters lying in a heap on the Griffin Park pitch with their heads in their hands as their opponents, and their jubilant fans rushed onto the pitch to toast their heroes. Cruel. So very, very cruel.

That despair brings me nicely to the topic of this blog. The setting was Istanbul. The year 2005. Liverpool Football Club had defied the sporting odds to reach another European Cup Final. All that stood between them and sporting immortality was European giants A.C Milan; one of the most successful clubs in European history. They had been here, done it, got many a t-shirt. 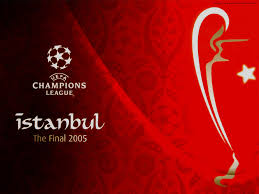 But so had Liverpool; themselves no stranger to the big occasion. 77, 78, 81, 84… Four European Cups. Four nights that Liverpool fans will never forget. Regrettably, I was not alive to witness any of those triumphs, but what was to unfold on Wednesday 25th May, 2005 was, to this day, the most incredible night of sporting drama I have ever witnessed. The tension was palpable. A group of friends huddled around a television screen waiting anxiously to cheer on their heroes to sporting immortality.

What followed nearly put me of sport for life. It had no meaning to me. I was sick.. the kind of sickness that you can only describe when something means so much to you. Like losing someone you love.. Obviously not in the same context, but as an avid Liverpool fan, the feeling was very similar. For 45 minutes of my life I was numbed, absolutely numbed. I looked at my friends. They looked back at me. Not a word was spoken. 1-0, 2-0, 3-0 … A.C Milan playing football out of this world. Hernan Crespo making my heroes look like little boys. If this was something I loved, I had momentarily forgot why.

I was living my own personal nightmare and I wanted it to end. Now. Nothing was worth this.

But then, something happened that will be talked about until the day I leave this good earth. A sporting comeback that not only defied the odds, but in truth defied belief. Not even John Lennon could have dreamt what was about to unfold within the walls of the Ataturk Stadium. Seven scintillating minutes that will be talked about within the footballing fraternity forever. The collapse of a European giant. Gerrard providing hope. Smicer turning heads. Alonso following up his missed penalty to smash the ball home and send all associated with Liverpool Football Club into raptures. Unbelievable raptures at that. A group of friends jumping about the living room like they had just scooped the jackpot on the Euromillions. To be honest no money could buy this moment. This was sporting theatre at its very best. Liverpool had came come back from the brink to contest the European Cup, and somewhat predictably, I had no nails left.

The game ended level after 90 pulsating minutes. The common phrase of a ‘game of two halves’ never had more meaning. Despair to indescribable belief and hope…… The ‘What if’ question at the forefront of the human mind. What if Liverpool scored again to complete the most remarkable comeback in Champions League history?

To the common fan this was agony, to the neutral it was ecstasy. The game had everything. Absolutely everything. Then, that save. The magical intervention from Dudek that is still talked about to this day. Was it luck? Was it a keeper at the very top of his trade. A mixture of both perhaps. Nonetheless a fantastic close range block to deny Shevchenko putting Milan ahead again.. The strikers reaction telling you everything you needed to know. He thought he had won the European Cup for his side. But ‘Big Ears’ was coming home. It was coming home to Liverpool.

Brentford had the chance to clinch promotion from 12 yards. The same 12 yards that now stood between Liverpool and another European Cup. In sport their is a fine margin between winners and losers, champions and nearly runs. It was a shame someone had to lose this unbelievable spectacle, but I would be lying if I said I was glad it wasn’t Milan. I was delighted it was Milan. The moments that followed have no words, but I’ll give it a go. Penalty miss after penalty miss. Cool head after cool head.. Another European cup destined for Anfield. And this time for keeps. Then the moment that made my love of sport completely worth it. Shevchenko missed.. Well he didn’t actually, but the outcome was the same. Dudek his nemesis once more as Liverpool flooded in the direction of their goalkeeper to celebrate another European triumph. They had done it. The unthinkable had become reality. Sport was the winner, and I woke up with a very sore head the following morning. There’s the ‘magic’ I keep referring to. Nothing compares to it. Nothing ever will.