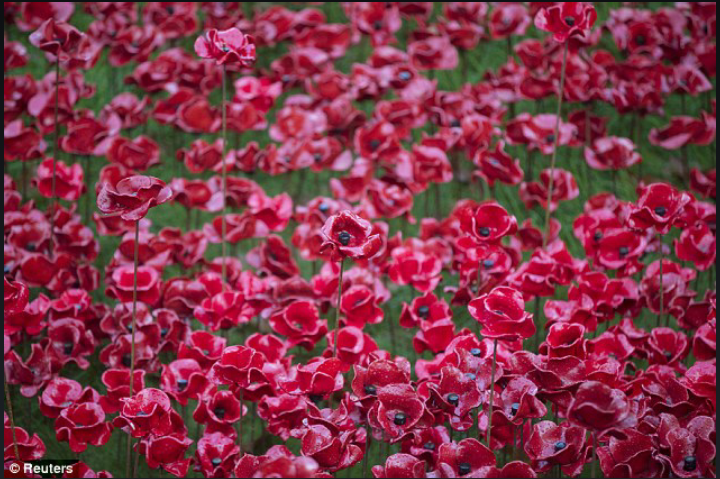 AT THE GOING DOWN OF THE SUN,
AND IN THE MORNING,
WE WILL REMEMBER THEM.

For me Remembrance Day and wearing a poppy with pride is a very personal thing, as I feel it should be for everyone.  Now I put up my hands and admit even though I am born and bred here I know nothing about the politics and religious divides within Northern Ireland to give an educated and correct reason, perhaps answer to the apparent divide over Remembrance Day.  This is solely my opinion and my point of view.

For me I wear my poppy to remember all those brave and courageous men and boys which include my own grandparents, great grandparents and family who fought in WW1 and WW2 for the freedom I have now.

I know others wear it to also remember those who have died in wars or battles since.  However within Northern Ireland I see a great divide, from what I have seen a lot is religious.  One religion seem to wear the poppies and the other refuse to.  Look at the recent premiership footballer from Derry/Londonderry who refused to wear a poppy and was booed for this.  For him the reason behind wearing a poppy he said had changed.  I don’t think publicly there is a defined reason or group of people, but for him personally it has and it does.  Yes perhaps his ancestors fought for the Irish regements in WW1 and WW2 but for him too much has happened conflict wise within Northern Ireland and the army so he feels a poppy would support something he doesn’t.

What I’m trying to say is that’s OK not to wear a poppy, no one should be judged on their believes or reasons to do something or not.  Wearing a poppy has a very personal reason behind it and I’m sure if you ask 3 different people why they do or don’t they will probably all have a different reason.

The most important thing in my opinion is that from everyone’s individual perspective right or wrong to others, there are men and women who at the end of the day are or were someone’s family, and these people are being remembered.  Hopefully one day no more names will have to be added to lists or remembered as war and fighting won’t happen (probably doubtful but we can’t give up hope).

I hope I haven’t offended anyone, as I said this is my own opinion and I feel whether we agree or not everyone’s opinion should be respected.  So before anyone says something to the person wearing or not wearing a poppy, stop and ask them why,  educate yourself.